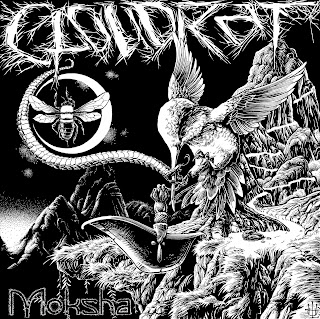 You can read all the magazines and websites you want searching for new music to satiate that burning desire but often it’s the bands suggested by friends that make the biggest impression. Such was the case with Cloud Rat. They’re the kind of band that makes your jaw drop and eyes bug out, and then keep them that way for the whole album. The album being referenced is Moksha and it is 30 minutes of mind-blowing grind. Well, not all grind. When Cloud Rat are going all out, the results are absolutely flattening.

This trio (from to be exact but this is anything but pleasant music) packs as much as they can into every song. Cloud Rat augment their furious grind attack by working doom tempos, sludge ridden passages, tremolo picking and d-beat groove into their retinue. Often all within the same song. The tracks twist and turn on a dime with concussive inertia.

Drummer Adrien abuses his kit as if it’s some foul beast that just won’t die, blasting away or laying down that d-beat with equal abandon. Guitarist Rorik follows suit with seriously crunchy tone, sick riffs and even some industrial flavour (“Aroma”). But Hell hath no fury like a Cloud Rat (vocalist) scorned. Vocalist is seriously pissed off. Her spitting nails delivery leaves no room for argument. Her screams are manic and vitriolic, teetering on the brink of madness. While her lyrics deal with very serious topics such as abuse, neglect and drugs, they are presented in abstract and metaphorical ways. As angry as she sounds there is an underlying sadness to it. As if a deep emotional hurt is expressed by lashing out. It’s made for one of the best vocal performances I’ve heard in a while.

But Moksha is not all slash and burn, and violent rage. “Infinity Chasm” sounds like Veruca Salt dropped acid and left the recorder on in the rehearsal space. That is until the track builds in intensity until it explodes for the last 30 seconds reminding us that this is still Cloud Rat. They even cover Neil Young’s “Needle and the Damage Done” transforming the song into a much more sonically formidable beast.

“Vigil” may be the most powerful track on the album. Two minutes of demented rage directed at the lack of concern and compassion in today’s world. I must admit, I get shivers at the end as Madison screams, with the utmost conviction, “Simply love/We shouldn’t survive/We shouldn’t exist/All of a sudden, Earth/My chest feels heaven”.

Breaking the mold of the hedonistically violent grind found on most of the album is the closer “Moksha”. Whispers and drone blow across melancholic piano. The listener is overwhelmed by a sense of hopelessness and defeat. Its placement at the end of the album is like a quiet sob when you’re finally alone; the sweet release of a held breath or the dead-eyed shock in the aftermath of catastrophe, and it’s liable to bring you to tears every time you hear it.

Moksha is a stunning album in every sense of the word. Brilliant performances from all involved create a multifaceted grinding blast encompassing a vast range of emotions. Its unpredictable nature and stellar execution produce enough “Holy fuck!” moments to make the Pope resign. Moksha is visceral and transformative and human. For fans of highly destructive grind with meaning, I cannot recommend this enough.

And as if this album didn’t capture my heart enough, the vinyl jacket is printed on old recycled jackets turned inside out. The beautiful artwork printed in an enviro-friendly way? It’s all just too much.