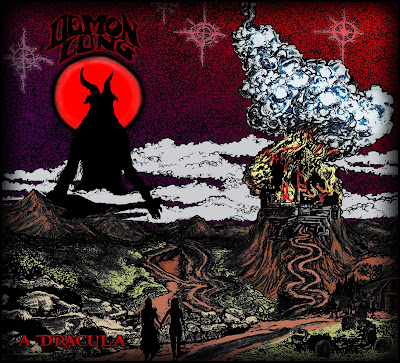 Back in 2003 I reviewed Demon Lung's The Hundredth Name for Ghost Cult Magazine giving the album a 9/10 and likened it to a “modern doom masterpiece.” Time has done little to alter that sentiment as the CD still finds itself in rotation in the car. However, it might be usurped by the Vegas group's latest offering, A Dracula. This time the doom quintet base their concept on the 1977 flick Alucarda, the gist of which is this: the daughter of Satan falls in love with a nun and converts her to the dark side. She is killed by her fellow nuns, is resurrected by Satan's Daughter and together they exact their revenge on the nuns and the world. How cool is that?!

The band once again worked with Billy Anderson. His engineering helps give the music that penetrating warmth that envelopes the scene like a fog, obscuring all that lay beyond the here and now, allowing the listener to become one with the music. Music that somewhat manages to be even more epic than its predecessor.

After the acoustic intro “Rursumque Alucarda”, Demon Lung launch into A Dracula with “Behold, the Daughter”. The track features some swift rhythms that have no place on a doom record but Demon Lung make them work. Hey, Cathedral didn't drag their feet the whole time either. As we're introduced to the evil temptress those rhythms bring trepidation and mimic the pounding hearts of those confronting the Daughter. It does slow to groovier movements and ominous doom however. Through it all Shanda Fredrick's perfectly suited voice leaves no doubt that this is doom no matter the tempo.

Throughout A Dracula we can feel this dynamism. Fast sections give way to pounding riffs in a sludge vein as well as chugging doom signalling action of a most dark sort. One even finds quieter moments with Fredrick's croon dominating. Those times are ones of abject sorrow yet are usually followed by the muscular doom we've come to expect. One can think of and feel those times like tears drying and a resolve building into the resulting destruction. Revenge.

Time and again the unholy trinity of Phil Burns and Brent Lynch (guitar) and Jason Lamb (bass) serve up powerful and epic riffs reaching the highest spires and the deepest dungeons. Their unity is as natural as it is overpowering. Undoubtedly doomy tone and a bevy of riffs, punctuated by concussive chords slam the listener hard enough to make the heart skip a beat and the variety of moods pieced fluidly together reflect the drama of the narrative.

All this ensures not only a feeling of doom but also of terror through those racing tempos, barely perceptible, more felt than heard atmospheric touches and Fredrick's coldly seductive delivery. Saving perhaps the best for last, A Dracula concludes with “Raped by the Serpent”, where all things come to a head and Fredrick puts forth her most powerful performance.

There is no doubt Demon Lung have crafted a superb doom album here but what makes it special, and so intriguing, is how they're able to adapt the film into the lyrical concept without it sounding cheap. Especially without the use of samples. Other than the arresting chorus on the closer, my favourite lyric is from “Deny the Saviour” with “You worship death, I worship life.” I love that this is the Daughter speaking to the nun.

With A Dracula Demon Lung have once again rendered my soul to the darkness and put forth an album I'll be sure to listen to for a long time to come. Lurching doom, terror-filled runs more akin to death metal, Jeremy Brenton's thunderous percussion and Fredrick's (splendid) voice comprise the pieces of this excellent (sure, I'll say it again) masterpiece.

A Dracula on Bandcamp

Demon Lung on Twitter
Posted by Matt Hinch at 4:34 PM No comments: 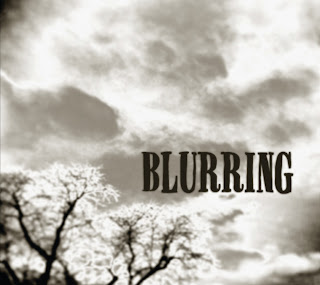 I tried to like this. I really did. I mean, it's got Danny Lilker and Erik Burke! But Blurring's self-titled debut is just not my cup of tea. I've never really heard any of Burke's bands (I only know him by his reputation.) and I'm not all that hot on Brutal Truth, so they're just names. But I generally like grind so hey, let's do this. However. I'm pretty picky with my grind. And I don't pick Blurring. It's all gnashing teeth and rubber-room guitar motherfuckery. It's so intensely chaotic that there's very little to actually grab on to. Hooks? Get outta town. Melody? Pfft. Then again, it is grind.

Scott D'Agostino and Matt Colbert (guitars, both ex-Kalibas) twist and squeeze all sorts of ear-raping noise from their guitars. And for those hell bent on energy and pure craziness, dig in. There's plenty of madness to go around. Burke's percussion follows of course, adding some structure to the din.

Lilker's basslines sound solid. When you can hear them. You have to really try and pick out the rubbery technicality rumbling away behind the walls of insanity scrambling your brain. Mark Welden's vocals are feral and sickening; more black metal than grind. More werewolf than barking. They change the tone of the grind from anger to hatred, from pissed off to vengeful. So there's that.

But by and large Blurring is one long rocket-propelled grenade launcher of “fuck you” set to fully automatic. Barely controlled chaos rides the knife edge of insanity but never is there any real danger of falling to the right-minded side. I'm not trying to say it's a bad album, it's just not my type. Other than some respites during “Rape Van” and “The Devil I Know” it's just a little too crazy. If you're one of those individuals that can soak up and assimilate madness, you'll get all you can handle. But if you like a little more core to your grind, there's other bands out there to satiate your needs and blur your mind.

Blurring on Bandcamp
Posted by Matt Hinch at 11:16 AM 1 comment: