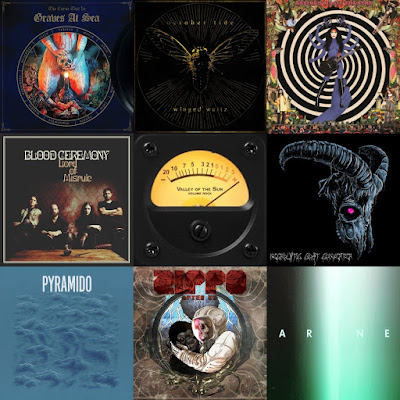 As you can see by the fact that this is being posted a good two weeks after the week in question, this taking a break thing is serious. This site is sorely neglected regularly but I was writing a lot elsewhere. Anyway, I'm scaling back to get a grip on myself and clear my head. But I can't turn off completely (out of guilt) so I'll continue with this series as best I can. I'm going to try something fun next time I hope. I have to make sure I can pull it off. You'll see. Until then, enjoy this stunningly rifftastic week!

It's taken a good long time but we finally have a full length Graves at Sea release with The Curse That Is. Not that their previous work hasn't made an impact but here we're graced with over 70 minutes of writhing, bitter, vengeful doom where every second makes your very being an avatar to its will. The cavalcade of ripping riffs are heavy and overpowering, capturing some of the essence that makes Sleep and early High on Fire so captivating. The paint-peeling vocals are wracked with pain and a desperation for understanding beyond the self. Their relatable insanity taps into that piece of us begging for release. From start to finish Graves at Sea batter the listener down to an unrecognizable stain and in doing so have crafted what could become a classic doom album. Embrace the curse.

The Curse That Is on Bandcamp

Not being well versed in the Peaceville Three, or even Katatonia for that matter, should preclude me from being able to speak on Winged Waltz, the latest from melodic death/doom quintet October Tide. But you don't have to be to “get” them. The third album since the band's reformation in 2009, Winged Waltzpowers through the darkness spreading melancholia and sorrow.

It's a beautifully crafted album full of ups and down, heaviness and light and is bursting with emotion. Crunchy death and draining vocals are mated to arching melodies and hard won drive. Fredrik Norrman's guitar work is masterful. Passive and active listening both yield amazing enjoyment but you'll want to dedicate time to digging in as the storm clouds gather and the world grows dark.

UK's Purson created quite a buzz for themselves with 2013's The Circle and the Blue Door, leading to high expectations for new LP Desire's Magic Theatre. As you can tell by the cover, the psych/prog group packs all they can into the dramatic album.

The rock opera quality of the work is apparent immediately, recalling the kind of feeling heard on The Beatles' Sgt. Pepper's. Work in The Who and Queen for good measure and get psyched by the Hendrix-isms (“Electric Landlady”). Organs, flute and horns complete the flashback show. DMT is quite a musical trip with Rosalie Cunningham narrating the acidic journey with dynamic grace. It feels like the art they were born to make. If rock opera's your ticket, enjoy the show!

I talked about this album in my last post. But you can see that it still showed up this week. Because it's awesome and I keep listening to it.

Volume Rock by Valley of the Sun says really all that needs to be said in the album title. This is high energy rock that begs to be cranked to stupid volumes. It's pretty radio friendly stuff, not really metal at all. Lots of catchy riffs and other tasty guitar work with a little Fu Manchu/QOTSA fuzz tacked on. It's not overly complicated but that's not what you're looking for with heavy rock such as this. Keep it simple. Crack some brews, sit back with some bud(s), and let the speakers do the work.

Created by Chris Voss (@cmvoss042 on Twitter) Demo MMXVI is his initial offering under the name Necrolytic Goat Converter. And the parched black metal within reflects the name. Abrasive guitars and even more abrasive rasps sandpaper the ears into a state of living death. Warm bass and spot-on percussion round out the feral presentation. Miraculously he's done this all with Garage Band. Dude's got more time than I to figure that program out!

But now I'm inspired to try. Voss is exorcising his demons (and spoiled milk) on this bleak and powerful release. And I'll be damned if anything is going to beat that album cover this year. Fuckin' sweet! It's a deeply personal outpouring executed brilliantly. Load up on batteries, spikes, corpsepaint. Drag your stereo out into the abyss. Crank it to 666 and get converted.

Vatten is a crazy good mix of doom's weight and plod fused to the dirty tone and pissed off attitude of sludge. Nearly every note is a call to destroy. Hammering riffs and muscular drums assault the listener guided by fierce and forceful all out yells. Not to be dumbed down, Pyramido layer a ringing atmosphere in sometimes that can make them feel bigger than they already do. This Swedish outfit is pretty cool. Check out Vatten and you'll have a smashing good time. Literally.

Zippo is a pretty cool band that I'd never heard of until now. But it's bands like this that make "stoner rock" my preferred genre. Head noddin', toe tappin' stuff. After Us is loaded with gritty vocals, groove and some deadly low-end fuzz. Ass-kicker songs are mixed with more laid back tunes (and sax on "The Leftovers"). Nice variation, good riffs and that atmosphere you're looking for in a stoner/sludge/psych band are all present and accounted for. It's sunny out. I wish I was at home crankin' this outside.

After Us on Bandcamp


What do you get with a collaboration between post-sludge heavyweights Cult of Luna and the volatile nature of Julie Christmas (ex-Made Out of Babies, Battle of Mice)? You get a bunch of words not appropriate for this site. Mariner is that good. It would have been great without Christmas, but her contributions take it to a transcendental new level.

Melody clearly drives the sails. Both parties lift the listener to weightless heights with it through many stirring passages. CoL's solar storms and nebular skies are countered by the grace of Christmas's interplanetary siren call. But when she puts that edge on she becomes the supernova battling the lunar roars. Mariner is beyond stunning. It's a match made in the heavens.

Keep an eye on Twitter (@kingdomofnoise) for more of what you need to hear!
Posted by Matt Hinch at 6:29 AM No comments: