Striker - Stand In The Fire 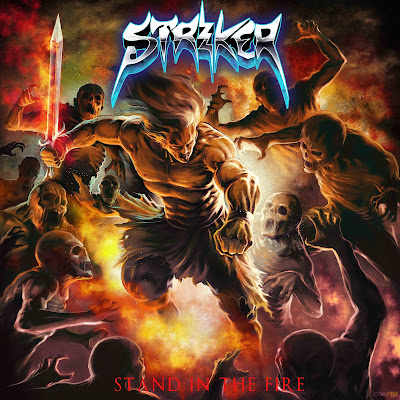 I don't really have much to say about Stand In The Fire from Edmontonian metallers Striker. Everything about them screams heavy metal. From their logo to their image to the music. Hell bent for leather and denim or what!

They've got their own label for this release (after a couple on Napalm) and hey, why not? I have to give them props for their chops and cred for their shred but this just isn't my kind of metal. It's too "Metal". It's like thrash (and all the mind-numbing speed that can come with that) with NWOBHM influences (namely Iron Maiden and Judas Priest) and penchant for some glam elements. Balladish songs and what not. I skipped that whole era for the most part but those moments remind me of Motley Crue if anything.

The closest Big 4 analog would be Anthrax because honestly they're the most fun. And Striker are plenty fun for those who are looking for it. I can't say it's bad because it isn't really but Stand In The Fire burns in a different place than my desires. But hey, if you like high energy, fists in the air, hair flying Metal with a capital M, get a little closer to the flames. And I know plenty of folks who live for this stuff.

Striker on YouTube
Posted by Matt Hinch at 12:48 PM No comments: