We Hunt Buffalo - Head Smashed In 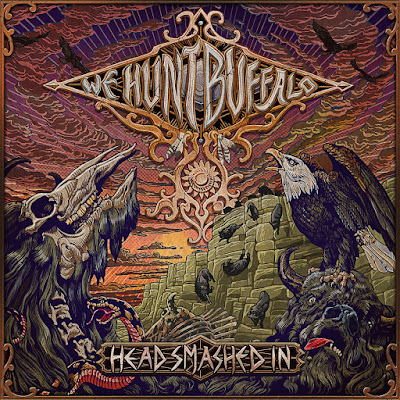 We Hunt Buffalo return with Head Smashed In, their second album for Fuzzorama Records. It’s one of those albums that’s deceptively dense. On the surface it seems pretty straightforward but there’s some stuff going on in the back you might not pick up on at first. Vocally at least. Speaking of vocals, “Angler Must Die” has the clean vocals present throughout but there’s also some screaming that comes right out of left field.

We Hunt Buffalo also drop down into some heavier moments than I wasn't expecting. This is basically fuzz-laden hard rock so that added crunch comes in pretty handy. Ya know, a little extra flavour. It’s not that there’s a lack of riffs though. There’s lots of that to go around but you gotta season the meat, right? (or in my case, marinade the tofu)

Head Smashed In is a relatively “safe” spin. There’s great tone, sweet solos, and the parts where they aren’t pushing full ahead are sprinkled in appropriately. Some songs have great muscular energy and some…. not so much. Personally, I find their softer songs and/or parts lacking. Dynamics are fine, but they just don’t play to their strengths as well in my opinion. Personal preference.

They do craft good songs though. No awkward transitions, no overstayed welcomes, nothing sticking out like a wart. Psych atmosphere has its place as well as a subtle Southern feel at times. It’s consistent too. “Heavy Low” sucks you in to start and “Anxious Children” as the penultimate track grabs your attention again just in case. It’s got a sweet main riff, cool atmosphere and the bass just rules on this one.

Inoffensive, solid, riff-centric hard rock when you’re going to get here, equally suited to dedicated listening or background tunes. You definitely won’t smash your head in! I hope. Go ahead and crank the fuzz!