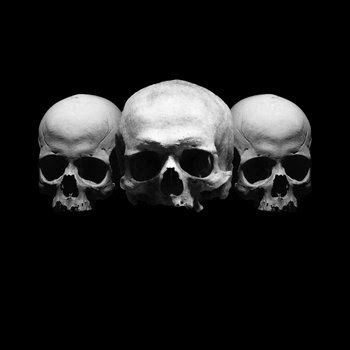 Vyrju is a (mostly) one-man black metal band from Norway. Jan F. Lindso performs all instruments except drums and clean vocals which are handled by session musician Tim Yatras. Lindso contacted me on Twitter before the album's release last year in hopes I'd review Black and it unfortunately got lost in the shuffle. Time to make amends, however brief.

Over four songs Lindso, as Vyrju searches deeply for peace. Through undulating melodies and icy tremolos one can feel the desperation. Marching rhythms feel like a listless plod through life, one foot in front of the other, moving inexorably towards doom.

"The Residue of Life" begins majestically before launching into a scathing black metal tirade with anguished screams calling to the void. Despite the outpouring one does not feel a sense of triumphant catharsis. Just endless suffering, emptiness and misery. While instrumental "Gone" and its acoustic nature lays bare a tortured soul that rages elsewhere.

Black is dark and necrotic, pulling inspiration from second-wave bleakness while fulfilling the desired melodic quotient. It's very personal lyrically as well as musically becoming something both its creator and the listener can get lost in.

Black is both fiery and beautiful reflecting a deep-seated anxiety towards finding peace within oneself and the struggle to get there. This is emotionally-charged melodic black metal worth getting into. If only I'd done so earlier.

Vyrju on Twitter
Posted by Matt Hinch at 10:12 AM No comments: