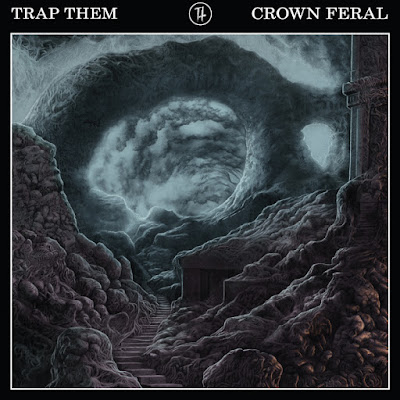 By now Trap Them have built quite a reputation as unfuckwithable purveyors of corrosive grindcore or "dark hardcore" as the Seattle-based foursome are often described. They've only strengthened their stranglehold on the upper echelon with new album, Crown Feral. Reception for 2014's Blissfucker wasn't quite as warm as that for previous LP Darker Handcraft but you'd be hard pressed to criticize this latest offering. It's 10 tracks force fed over 32 minutes that will have you choking on your own vomit trying to match their fierce intensity.

Opening with "Kindred dirt" Ryan McKenney barks over a slow build - like the deep breaths taken to steady the heart and mind - before plunging into the vortex of chaos unleashed over the next half hour. Once they get into it they leave no doubt that their fire burns hotter than ever. Trap Them slice and dice with buzzing guitars and percussion that just won't quit. The energy is off the charts. Adrenaline pumps so hard just listening to it that I can't imagine their live shows. Back when Blissfucker came out I even stated that if I saw them live I'd spend the whole time on all fours barking and snarling, foaming at the mouth like a rabid dog. I'd bark even louder now. Trap Them definitely have a way of bringing out our animal nature.

Few bands can tap into that feral side quite like they do. I won't get all hyperbolic about being the best this or the greatest that but they make it impossible to listen passively, especially during the hard hits on a track like "Prodigala". You just want to double down on the urge to unleash on everything in whatever way suits you best. Screaming, moshing or other such loss-of-self activities.

As much as Trap Them run circles around you in a buzzsaw fury, they can and do slow things down every once in a while on Crown Feral adding some dynamic flow to the album. Those moments still pull some groove amid riffs that blast like automatic cannon fire. In their "lighter" moments they bend and stretch your will with ease, as displayed on closer "Phantom Air" as at this point you've been made malleable and unable to withstand the onslaught. Have no fear though as the closing minute or so reignites the flame from still scorching embers and burns all to ashes leaving you no choice but to attempt escape through the harrowing portal that graces the cover. It will earn you no reprieve however as Crown Feral demands repeated listens under penalty of death as you're hurtled back in the chaos until you can simply stand it no longer.

Wow, that sounds cheesy. But it's true.

Crown Feral established its grip early and often, tossing you around like a predator toying with the kill firmly clenched in its jaws. The "quieter, slower" parts do provide some breathing room but I doubt Trap Them took your comfort into consideration when crafting their all-out assaults.

Face it. You're trapped. There is no escape. Give in to the violence, the chaos, the power. Channel it and use it, and grind it all to dust.

Posted by Matt Hinch at 3:42 PM No comments: