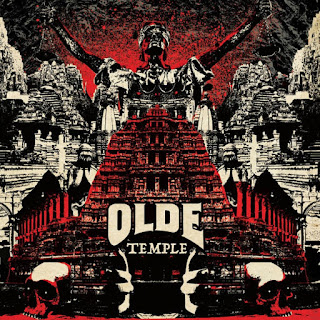 Let’s get this out of the way first: I love Olde. I’ve been boosting this band from the beginning. Heavy-ass, sludgy doom from my neck of the woods? Yes, please! In case you don’t know by now, Olde was put together by guitarist Greg Dawson (Cunter). He recruited strangers from the same city to form the band back in 2014. (Or at least that’s when debut album, I was released.) Bassist Cory McCallum (Five Knuckle Chuckle), vocalist Doug McLarty (ex-Jaww, Catharsis, Holy Order), guitarist Chris “Hippy” Hughes (Moneen) and a fellow I’d been listening to for ages, drummer Ryan Aubin of Sons of Otis round out the quintet. With each release, including 2016 EP Shallow Graves, Olde just keep getting better and newest opus, Temple is proof of that.

Let’s start with the title track. My notes indicate bludgeoning slow groove. But there’s more to it than that. Like McLarty’s gravel-throated bellows for one. Aubin pounds away as Dawson, Hughes and McCallum churn through the heaviness, letting each note reverberate through your core, building up the chorus and smashing the ceiling, or rather, causing it to crash down. It shifts gears ever so slightly past the halfway mark where we find a sweet solo worthy of the song’s title.

Elsewhere Olde deliver track after track of doomy sludge. If bands like EyeHateGod, Buzzov*en, Crowbar, etc. come to mind, it would make sense. Although personally I feel Olde carve their own niche in riff-driven HEAVY music. It also depends on how you define doom. Opener “Subterfuge” is full of huge, muscular riffs of the hard and heavy variety. Their rubbery elasticity induces a furious banging of heads and when Dawson and Hughes lock in together it is unstoppable.

Bluesy, atmospheric solos cut through the murk, sometimes with a melancholic edge. Massive power sends the weak scurrying in the face of the Southern sludge-styled apocalypse conjuring, stomping it all to dust. “Fast”, mid-tempo, or slow, it matters not. Olde bring it from start to finish. Their m.o. - riffs - strikes right in my heart. They make you a puppet, pulling at you, moving you, destroying you. Take “Maelstrom” for example. There’s this riff that hits around the four minute marks that hits so hard that you can’t help but bang your head. I saw them play a small club a few weeks before the album’s release. They played a bunch of these new tunes. I was already in pain (because I’m old) and when that riff hit, I was powerless and went all out. It left me in pain for weeks. Weeks! But despite that, I still banged away while driving as I just couldn’t stop listening. “Centrifugal Disaster” yields similar results.

Closer “Castaway” is that easy end people who “need a breather” need before cycling back to the fury of “Subterfuge”. Syrupy basslines meet guitars ringing into the night, Aubin sounds most in Sons of Otis mode, and tremolos ride on ascendant chords spiraling up and crashing back down with the splash of a cymbal. It’s the closest thing to beauty these boys muster.

Temple is insistently catchy. I’m not saying that because I’ve listened to it a hundred times. (Ah, the privilege of band relations!) These riffs are hot. Dirty doom to the highest degree. Sonic beatings, broken necks, thoughtful lyrics and endless groove all come together to make not only for quite possible Canada’s best album of 2017, (sorry, Bison.) but one of 2017’s best globally. Oh no! I’m a globalist!

Worship the tone. Bathe in the glory of the riffs. Offer praise to percussion. Bow before the bellows. Enter the Temple.