Wrekmeister Harmonies - Then It All Came Down 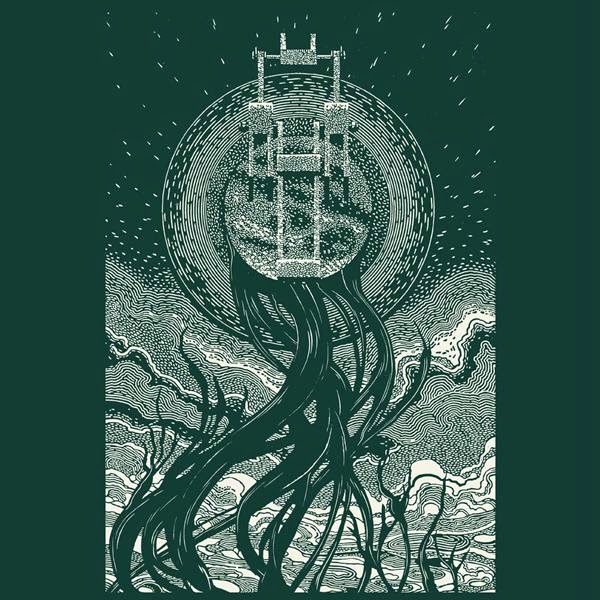 Then It All Came Down is the second work from the Wrekmeister Harmonies project spearheaded by J.R. Robinson. For this 34 minute track he's brought together the talents of a number of artists including Bruce Lamont (Yakuza), Sanford Parker, Chris Brokaw (Codeine), Ryley Walker and members of Bloodiest, Disappears, Indian and Leviathan to name a few.
The concept of the track revolves around the process of natural decay and accepting that all that is brought into the light must eventually return to the darkness.
Unfolding over such a period of time means that patience is rewarded. Containing a number of movements, TIACD begins beautifully with a droning organ and chimes ushering in female choral vocals. Acoustic guitar (Walker) seeps in from the middle distance completing the scene of serenity.
The peace is broken though as Wrest's coarse growls penetrate an ominous darkness that falls over the whole. A deep drone and various noises move the listener into an unsettling and foreboding realm. It's a short period of unnerving though as mournful strings come into play.
Sorrow and ache now dominate as all feelings of hope are now lost. The calm has been restored but it is a more desperate one. Lamont's pastoral chants deepen those feelings as the strings swell with emotion accompanied by more instrumentation, filling the sonic space to a breaking point.
At that time an ear-shattering tone explodes into powerful doom feeding back magnitude and crushing atmosphere. The tipping point has been reached and the decay goes from deterioration to crumbling collapse. It's absolutely massive and haunted by spectral vocals. The destruction intensifies as percussion enters, crashing as pieces fall away.
As the decay nears completion it softens, and a melody return amid the drone. Vocals both possessed and pastoral continue to afflict the listener as the serenity of completion comes full circle and the light fades into darkness.
Then It All Came Down is a powerful, thought-provoking and existential piece of music. Robinson's vision is executed with care and understanding. Bringing so many elements (and people) together could not have been easy but the results speak for themselves.
Although enjoyable (as much as something this morose can be) under any circumstances, the full impact of the work requires an ideal listening environment. Solitude, subdued lighting and the absence of distraction allow for the full breadth of human emotions displayed here to encapsulate the listener, penetrate the soul and thus allow the full scope of the composition to be realized.
One can only imagine how moving this was when it was debuted at the Bohemian National Cemetery in Chicago under a full moon in July 2013. What an experience that would have been.


Get Then It All Came Down from Thrill Jockey

Wrekmeister Harmonies on Facebook
Posted by Matt Hinch at 11:10 AM No comments: