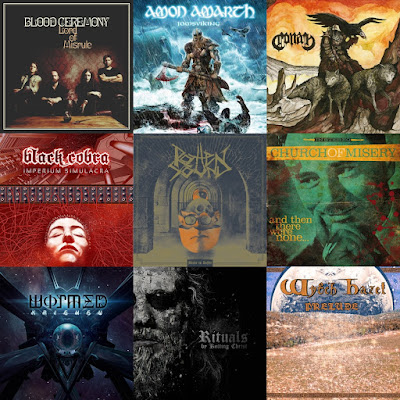 I'm trying something new. Every so often I'll take what the last.fm generator makes for my collage, even though it's not an accurate representation of what my last week of listening was, and say a few words about each one. Sound like fun? I hope so. And I hope this gets me to pay a little more attention to Kingdom of Noise. Anyway, let's do this!

This album is fantastic! Somehow their previous album, The Eldritch Dark slipped right by me. I've yet to go dig it up because I can't stop listening to this one! Few bands do the "retro occult rock with female singer" thing as well as Blood Ceremony. Alia O'Brien is just one facet of what makes this album so good. The riffs are smooth and catchy, the mood is perfect, and O'Brien's double threat wins on both sides with her powerful voice and folky flute. Not to mention the songwriting. There have been days I've listened to Lord of Misrule on repeat from the time I wake til I turn in for the night and I was just as excited about it at the end of the day as I was at the beginning. This one's going to put up a good fight for Album of the Year.

Good ole reliable Amon Amarth. I named Twilight of the Thunder God my favourite album that year. They keep making new albums but they don't keep topping my list. See, at the time it was the first I'd heard the band. They were fresh and new to me and I loved it. But three albums later it's not fresh or new anymore. I still enjoy them but churning out album after album of the same stuff doesn't always work for me. It might for many but maybe I'm just not fun. Melodic death metal about Vikings and stuff is cool and all, and I don't even know what they could do to change it up, but it's getting stale at this point. Truth me told, I have enjoyed Jomsviking more than Surtur Rising and Deceiver of the Gods.

CAVEMAN BATTLE DOOM!!!! Can't put it more plainly than that. Heavy as Hell doom battered out with epic screams and bellows carrying between the mountain peaks. They've picked up the pace a bit on this one, moving away from their stereotypical slow and steady march. Or at least the march you expect. No matter the pace Conan are great and Revengeance has become my go to album for when I can't decide. It delivers for me every time. It's bloody massive and I love it!

This duo can bring it. Punishing sludge with a sort of punk energy and tendency for violence. Their aggressive style gives the listener a thorough beating. Take High on Fire, the Melvins and the spastic nature of noise rock and blast it out of a tank as it flattens humanity before it and you get the idea. Black Cobra were supposed to play locally a couple years ago with Black Wizard and Anciients but they didn't get across the border. Man, that would have been a killer set. I love this kind of stuff live. My neck and back have different ideas though. It's been a few years since they've released an album but Imperium Simulacra makes the wait totally worth it.

Who doesn't love Rotten Sound, right? Losers, that's who. They've long been a band that doesn't believe in reins and just lets it fly. Explosive grind with nuclear capability that knows when to slow down and let the heaviness do the torturing. Vengeful vocals tough enough to break down all defences. If memory serves correctly Abuse to Suffer is a little more controlled in general than 2011's Cursed and 2013's Species at War EP. But that doesn't mean the bone-breaking tone and bath salt-equivalent extremity don't make me want to dismantle the world with my bare hands. Because that's exactly what I want to do.

Abuse to Suffer on Bandcamp

I admit I wasn't all that into Church of Misery until now. Bear in mind that was more ignorance than distaste. I just didn't listen to them much. I've got a split around here somewhere. And neither was I much for Repulsion. Same. I might have heard Horrified a couple times. So I wasn't as excited as many when word came down that Scott Carlson was taking over vocal duties for a revamped lineup for And Then There Were None. But damn. This is killer shit. About killers and shit. I knew to expect that much. Slow jammed, Sabbath influenced serial killer stoner doom that goes down smooth and leaves a warm feeling inside from veteran musicians feels pretty good to me. Now it's time to dig in to that back catalog.

On Twitter I said Krighsu was like "I'm hurtling through a wormhole screaming about cool, interesting stuff but you can't understand a fucking word!" That was my first impression and it still holds. I just can't get with this kind of tech death. I just can't. I didn't like the latest Gorguts either. Or Obscura. Or just about any of the super-technical, piq-squeely writhing ball of space maggot stuff that falls into this style. Have at it though. I'll stick to Archspire. I can handle them.

I don't have any real knowledge of Rotting Christ's work before Aealo but I love that album. Kata Ton Diamona Eaytoy didn't stir up the same emotions for me. I can't say Rituals does either but it's pretty much what I expected from the Greeks this time. All their stylistic touches are present and accounted for and it's those Eastern and folk touches that set the band apart. They've got a massive sound lush with melody and power fit for crushing the enemy. It's the kind of black metal that makes you feel alive. The more I listen the more I like it so I have a feeling it will stick around my playlist for a good while.

It's a fun album if not exactly the sort of thing I listen to regularly. Fairly dramatic, clean vocals, traditional heavy metal sort of thing. Not Maiden clones but he does hit some high notes. The press materials paint Prelude as a mix of Jethro Tull, Wishbone Ash, Thin Lizzy and NWOBHM. I can't argue with that. Based on medieval influences and sporting a sense of grandeur often found at LARP events, there's all kinds of uplifting moments. It's pretty good stuff for the style but there's only so much of it I can handle in one sitting.