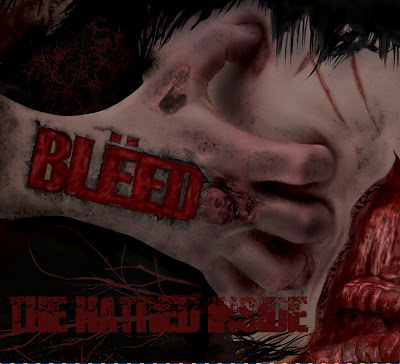 On first listen The Hatred Inside by Blëed sounded kind of derivative. Subsequent listens didn't lead to some epiphany but the critical edges were softened. That doesn't mean Bleed are poised to make serious waves but for a modern (mainstream-ish) metal album it's not too bad. If you didn't know already, I'm more of an underground guy.

They still sound like weekend warriors that recorded an album but at least it's fun. There's no lack of mosh/bang-worthy riffs or rhythms as they bash their way through these 11 tracks. They also change things up enough from one track to the next to keep the listener awake.

I'd say it's mostly thrash based but there's melody working its way in. Death metal makes an appearance and NWOBHM drops by a few times to let everyone know what's up. More often than not I'm reminded of GWAR oddly enough. The lyrics are more earthly but the vocals have an Oderus/Green Jelly flavour and phrasing. Rounding out the list of styles comes a smattering of nu-metal in the vein of Slipknot/Mudvayne without ripping them off too obviously.

The bass stands out often in the mix and even gets some solo time. At times it does come off a bit sloppy but it's a heck of a lot tighter than I could ever hope to be. (Even though I did have a few solos in the only band I was ever in.)

It's hard to compare Blëed to any one band but that's good. The Hatred Inside is a solid slab of mainstream metal suited for the masses that are content to throw back some brews and headbang until they can't see straight. Going to far as to tear yourself apart as depicted on the cover is a stretch but the longer you listen the deeper it sinks its teeth in. And truth be told, some of those riffs are pretty fuckin' killer.

Posted by Matt Hinch at 8:32 PM No comments: