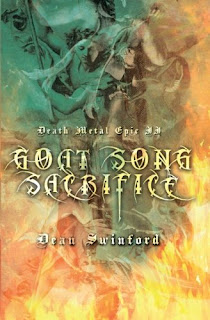 It seems like forever ago that I reviewed Death Metal Epic Book I: The Inverted Katabasis for a site that no longer exists. (2013!) So here's a little recap before we get to Book II: Goat Song Sacrifice.

Death Metal Epic follows our protagonist David Fosberg navigating post-high school life as a death metal guitarist in Miami during the heyday of Floridian death metal. Tape trading, fanzines, no internet. You get the idea. His band, Valhalla needs to fulfill their contract with Plutonic Records but the rest of the band split for college and gave up on the DM dream. Typical. Happens all the time.

David just happens to hook up with Juan, an eccentric fellow with some great ideas. Together they craft a very experimental album that satisfies the label enough that they are sent on a promised two week tour in Europe. Great, right?

The tour is a fool's errand. A way for the label to get Valhalla off the books and out of their hair. A disaster from the start, David and Juan quickly abandon the tour altogether. In the meantime, David meets with Nekrokor, a mysterious black metal musician and label owner who originally hated Valhalla's “life metal” but now wants to take the rechristened Katabasis under his wing. Book 1 ends with Fosberg taking a chance and staying in Europe to try and make his music dreams come true.

Book I (and Book II) are full of references to classic death metal bands as well as plenty from other subgenres. Swinford places these in such a way that -- and really, shapes David as a character -- exposes the metal culture as outsider culture. Which it is. But it also shines a light on how deeply passionate fans can be no matter how ridiculous it may seem, as anyone reading this probably knows from an insider's perspective. Swinford has struck the perfect level of self-awareness with Fosberg. Fosberg himself is even quite skeptical about just how INTO it some of his compatriots are. He, when you get right down to it, just wants to play some metal.

Nonetheless he faces the challenges of his new environment head on. Juan stuck around in Belgium too and their lives continue to intersect. I'm trying not to give away too much of the story here! The ethos of Fosberg's new associates, Nekrokor, Nordikron and Svart (and Juan to an extent) and their band Desekration can seem fairly ridiculous but it gives (at least to me) an accurate portrayal of that scene in the early '90s. Death metal is getting old and tired, black metal is the total death. They take the darkness very seriously, at least on the surface. I mean, how serious can you be when you still live at home with your mother, Svart?

It's relatable though. Think about it. How “cool” would metal be if those involved didn't put on some kind of act? You can't take your book store persona (Fosberg's old job) on the stage. Lame. Even for me, I talk one way when I'm writing a review of some nefarious filth cut to wax the colour of eternal darkness splattered in the blood of innocents, and completely different when I'm shooting the shit with pals. Even if I'm talking about the same thing. Swinford exposes that duality even if the characters in the book don't want to admit it.

Character-wise we see Fosberg coming out of his shell. He's living on a different continent, trying to immerse himself in a different culture, and still chase the metal dream. That's a far cry from feeling trapped in a dead-end job in the swamps of South Florida. He's even putting old loves behind him. Sort of. We'll have to wait until Book III to see how that plays out.

All the strengths of The Inverted Katabasis are replicated in Goat Song Sacrifice; Swinford's intriguing, relatable and interesting characters, his deep knowledge of both metal history and the locations described (he grew up in Miami and studied in Ghent, Belgium) and his way of describing it all with just the right amount of detail. You can picture it all but it doesn't distract from the story.

The story itself is a page turner. It's easy to read for us neanderthal metalheads and our more learned peers should still find themselves engaged. Digging a little you'll find out that more than a little of the Epic is autobiographical. No goat sacrifices that I know of though. Knowing that puts a different spin on how you read the books. Swinford didn't just do his research, he lived it.

I highly recommend the series. Where else are you going to read death metal fiction? Ya, I thought so. Prepare a worthy offering and receive Death Metal Epic Book II: Goat Song Sacrifice!